Participation in community cleanups (ADTEC Engineering Co., Ltd. (ADT))
In Nagaoka city, Niigata prefecture, where a company’s dormitory is located, ADT employees clean up the side grooves once a year and a park nearby 3 times a year.
In last April, we carried out the clean up the side grooves and the park while paying attention to the prevention of the spread of COVID-19.
The reason for cleaning the side grooves is to eliminate sludge, garbage, leaf paces, etc. accumulated during the winter season and to regain the wastewater flow, and also to curb the offensive odor generated by the accumulation of sludge.
The snowfall was less in last winter compared to the previous year so it accumulated less mud accordingly.
As a result, the number of transportation for the mud accumulated on a single-wheeled vehicle was about half of the usual year.
After that, we weeded the park with local residents for about an hour and maintained the park so that children could play at any time.
Although this was an unusual work for us, we were able to carry heavy waste by the good communication with local residents to complete the cleaning without injury. 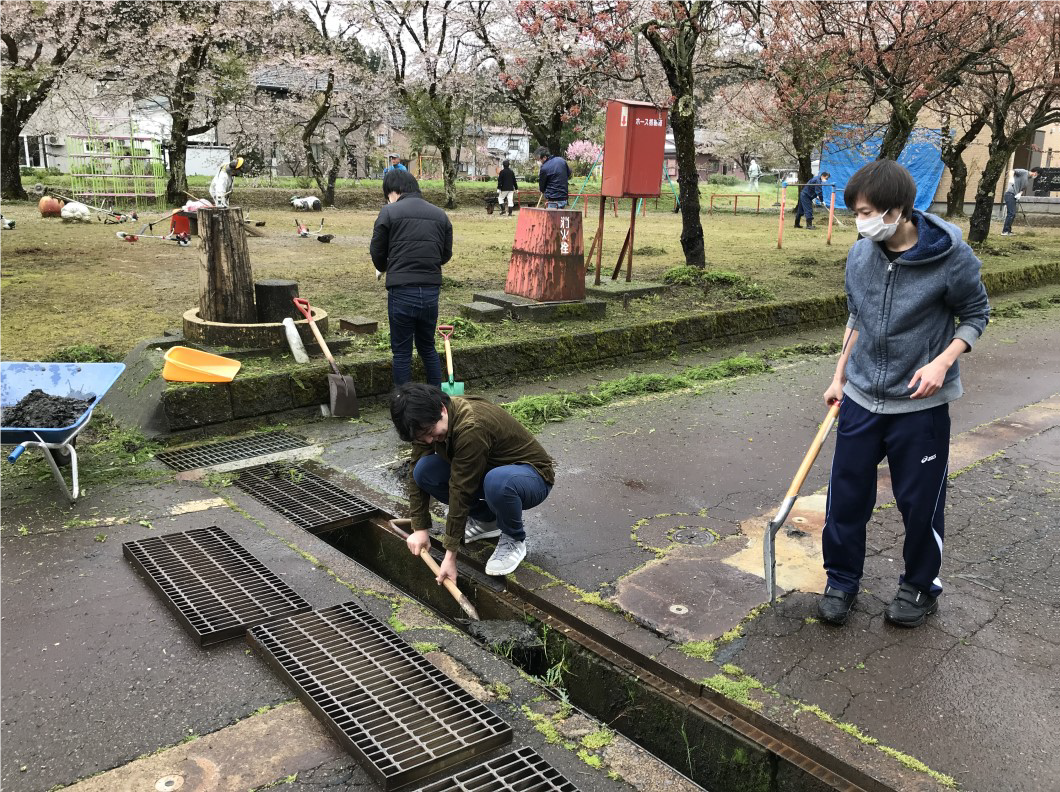 Participation in the cleaning of the Yangjaecheon Stream’s waters (Ushio Korea, Inc.(UKI))

On September 20, Ushio Korea, Inc. (UKI) had the FY2019 social contribution activity in the Yangjaecheon Stream in Gangnam District, Seoul. Every year, UKI conducts many different social contribution activities for, beyond business operations, fulfilling its social responsibilities to coexist with the community and to be considerate of the environment, among others. This year, 50 staff members participated in the cleaning of the stream waters using EM dumplings.

EM dumplings are balls of soil containing dozens of microorganism species or EM (effective microorganisms) bacteria that have an appearance similar to Dango, a Japanese rice-flour treat. They can improve the health of the soil, water, and air without contaminating the environment. In the activity, we tread on and kneaded soil to make it clay-like before separating it and rolling it into balls to make EM dumplings. We concerted our efforts, which resulted in nearly 500 EM dumplings being thrown into the stream.

We have been working on the installation of solar power panels at UPI since 2018, and successfully completed construction in 2020 by clearing a number of issues. Currently, final adjustments are being made to start operation, and the installation of the solar power system is expected to provide approximately 330kW (approximately 5-8% of the UPI's total usage) of electric power.

Businesses in California were ordered to follow strict water conservation laws and regulations during the droughts. CDS has worked to implement an onsite water management plan.

The plan included the following:

•       Purchasing and installing WeatherTrak irrigation system controllers at both facilities.  These controllers adjust irrigation based on current weather data.  This data is received wirelessly each day and automatically adjusts the irrigation in accordance with changing weather.  The controllers allow the user to select landscape-specific parameters (such as plant type, soil, slope and sprinkler type) to establish optimal irrigation schedules.
•       Introduction of drought tolerant landscaping which included California native plants.
•       Installation of water-efficient fixtures and appliances.

CDS’s water management plan helped reduce the use of a renewable natural resource as well as water conservation during California’s droughts over the past several years. Currently, drought conditions in California and specifically in Southern California where CDS Cypress is located has seen a signification improvement.