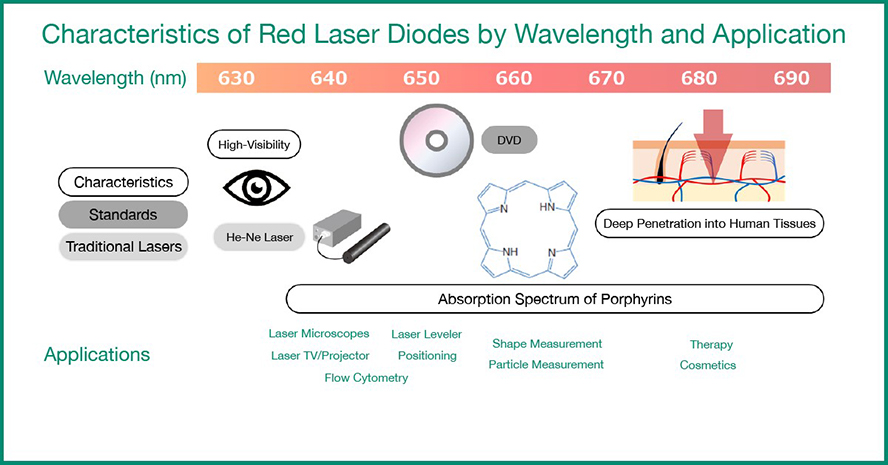 The 640 nm band is used in line lasers and laser pointers for positioning and levelers because it has high visibility among red colors, so the laser light appears brighter to the eyes. For applications such as laser TVs and laser projectors, where images are created by mixing colors of RGB lasers, 640 nm is widely used as a wavelength that has both high visibility and a wide color gamut that can be expressed.

Before the commercialization of laser diodes, helium-neon (He-Ne) lasers (632.8 nm) were widely used for fluorescence excitation and scattering measurements as a stable light source. Nowadays, laser diodes in the 640 nm band, which is close to the He-Ne laser wavelength, are used for fluorescence bio-imaging, for example confocal microscopy and scattering measurements, such as flow cytometry and particle size measurement.

Lasers for recording and reading DVDs were standardized at the wavelength of 660 nm, and performance of the lasers has improved as the market has grown. Laser diodes of this wavelength have been adopted for many applications, such as industrial line lasers and measurement lasers.
Light in the 670~690nm band, which is slightly longer than the wavelength mentioned above, is characterized by a particularly deep penetration depth into biological tissues among red light, which is about 2-3 mm in the case of human skin. Along with this, the existence of photosensitizers (porphyrin compound) that are highly bio-compatible, absorb red light, and generate reactive oxygen species has led to the application of light as a method of therapeutic treatment. 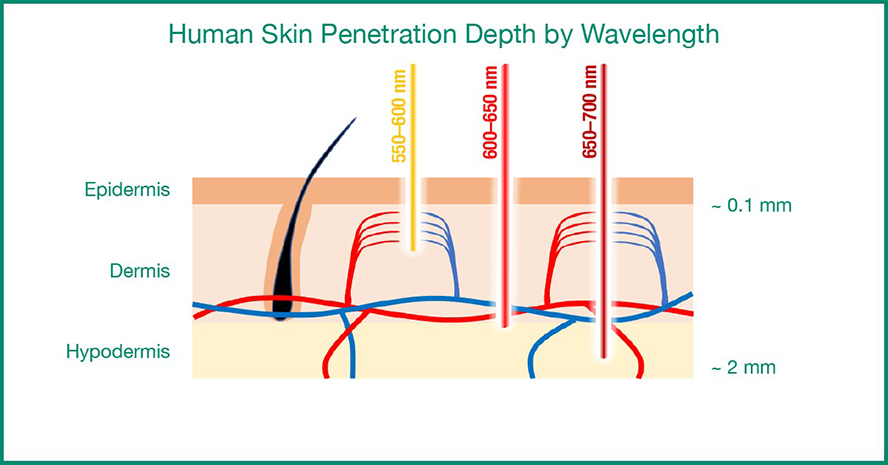 Photodynamictherapy (PDT) is a treatment method in which a photosensitizer with a high affinity for the lesion is administered and then light is irradiated to selectively destroy only the lesion tissue by reactive oxygen species generated in the tissue. PDT is used in the treatment of lung cancer, esophageal cancer, malignant brain tumors, and age-related macular degeneration1). Typical photosensitizers are porphyrin compounds such as Talaporfin sodium (peak absorption wavelength: 664 nm, marketed as Laserphyrin®) and Verteporfin (peak absorption wavelength: 689 nm, marketed as Visudyne®)2). For PDT, lasers are widely used because they are easy to guide through optical fibers and provide the necessary illumination. Laser diodes, which have recently become capable of producing high output power in Watt class, are also widely used. 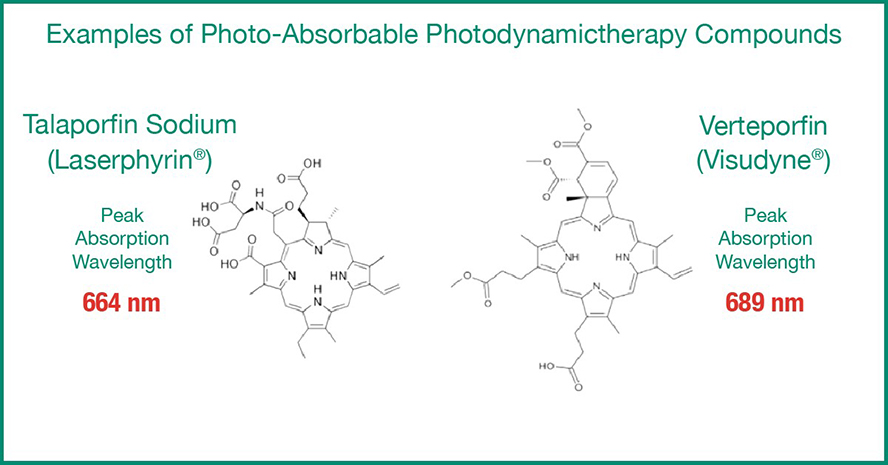 Photoimmunotherapy (PIT), a completely new method of cancer treatment using light is gaining attention3). PIT involves the administration of antibodies conjugated with photosensitive phthalocyanine compound (IR700), and then light irradiation. The peak absorption wavelength of IR700 is around 690 nm and, like PDT, laser diodes are often used.

From the many choices of Ushio laser diodes, here are some examples of products with lasing wavelengths in the 670–690 nm region that are suitable for the biomedical applications described in this article: 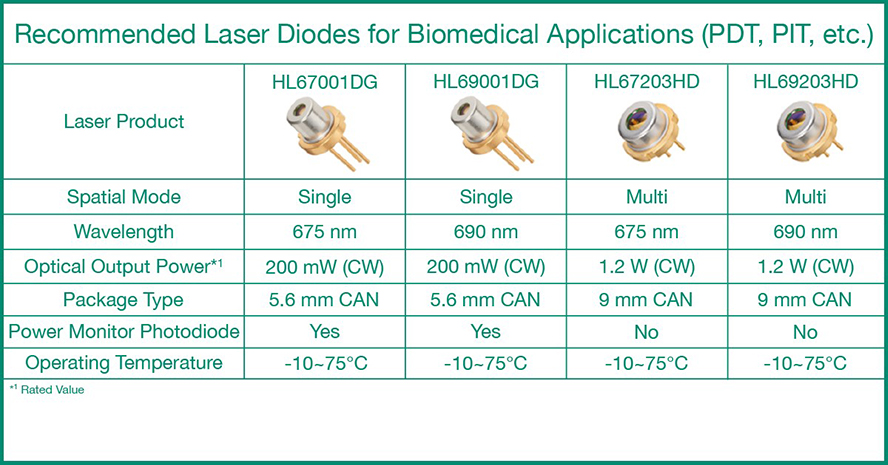 HL67001DG and HL69001DG are laser diodes with lasing wavelengths of 675 nm or 690 nm and optical output power of 200 mW (CW), the highest level for a single-mode laser diode in this wavelength region. The HL67001DG & HL69001DG are suitable for a wide range of applications in the biomedical field, including the development of photosensitizers, and feature a compact TO-CAN package of 5.6 mm in diameter, with a built-in photodiode to monitor the optical output power in the CAN package for easy optical output control.

All of the above four products can be driven in a temperature range of -10 to 75°C, making them suitable for integration into light source equipment.

In addition, Ushio's well-established LED products in this wavelength range are also available and have been used in many research cases4).

In addition to the products introduced here, Ushio offers a wide range of laser diodes to meet your needs. For more information, please visit the Ushio Laser Diode web page.