Featuring approx. five times higher output per package than conventional products, enabling the downsizing of irradiation equipment and the reduction of costs

This product is the latest model in the SMBB family of high-power LED packages, which were initially developed by Ushio in 2013 and have been used for diverse applications, including the quality inspection (sorting) of food and other products, medical devices, and defect inspection. At the wavelength of 850 nm, the product realizes both narrow-angle irradiation and the highest power output in the world, which is effective for long-distance irradiation. Thus, the product permits long-distance imaging using a surveillance camera, ANPR, or similar device.  Further, the high output power permits the reduction of LED packages per system, enabling infrared irradiation equipment to achieve smaller dimensions and lower costs. Accordingly, the product contributes to increased adoption of surveillance systems, and eventually to building a social environment with increased security and peace of mind. 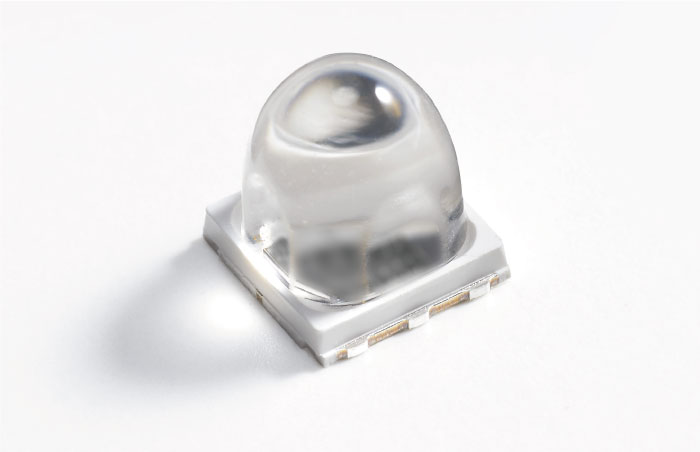 Reflecting the growing awareness of safety and security among people in recent years, surveillance cameras have begun to be used not only in buildings but also outdoors, such as in areas around buildings, parking areas, and city streets. The application of ANPR has also been expanded to expressways and public highways. Amid this trend, the distances that infrared illumination for outdoor surveillance cameras are required to irradiate have increased (to distances ranging between 100 and several hundred meters), demanding higher power.

In addition, while LED packages with lenses are used for the narrow-angle irradiation, which is necessary for long-distance irradiation using infrared rays, multiple packages need to be aligned in these units to secure a sufficient amount of light. This results in larger size, larger area required for installation, and a higher cost of the irradiation equipment, which are problems. Further, while there is technology for mounting multiple chips on a package to secure a sufficient amount of light, a large-sized outer lens must also be mounted on these packages to enable narrow-angle irradiation. This technological challenge had to be overcome to achieve further downsizing.

In response, Ushio developed the SMBB850DS-1200 series package with a lens, which is capable of emitting a narrow-angle beam using only one chip while significantly increasing the output power per package with a larger LED chip area.

This enables the reduction of the number of packages mounted on the irradiation equipment for surveillance cameras or ANPR and removes the need for an outer lens, permitting systems to be miniaturized and their cost reduced.

Ushio will continue to contribute to building a safe, reassuring society with light, by increasing performance and improving quality of LEDs.

・Light distribution angle of ± 19°enabled by a package with a lens, achieving narrow-angle irradiation
The product realizes an irradiation area four times wider and two times brighter in central illuminance than conventional products when used for long-distance irradiation (100 meters or longer). 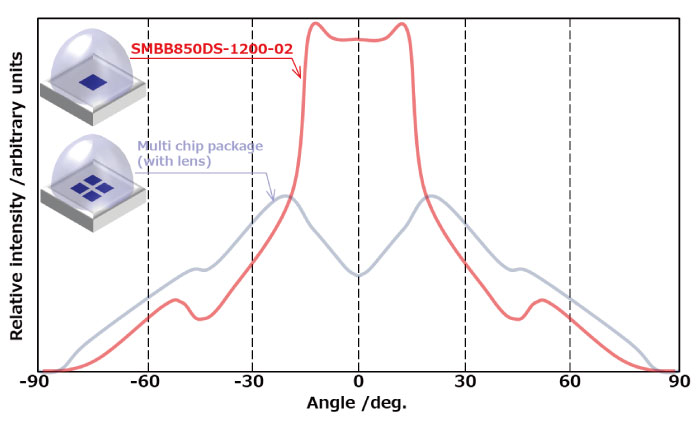 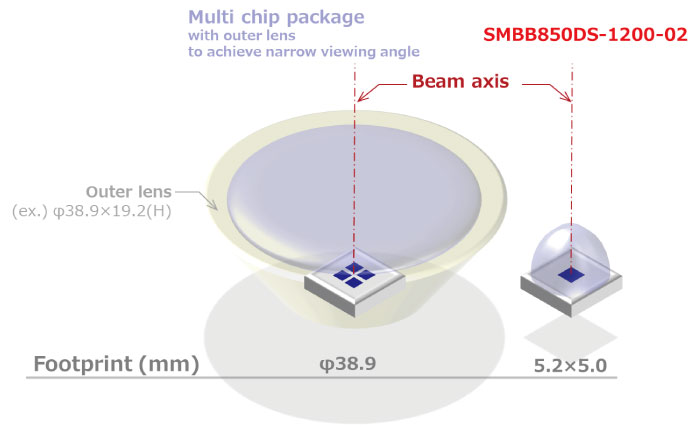 ・A wide variety of lenses to choose from
Lenses with light distribution angles from ± 19° to ± 61° are available according to the installation environment.