One of recent advances in optical nonlinear materials is the development of borate crystals with an optical absorption edge less than 200nm. Among several borates suitable for emitting VUV region by harmonic generations, CLBO(CsLiB6 O10 ) is very attractive for practical applications. Mori et al. [1] established a TSSG growth of high quality CLBO single crystals from an alkali-rich solution, i.e., Li2 O:Cs2 O:B2 O3 =1:1:5.5 in molar ratio. However, the Cz-growth from a stoichiometric melt (Li2 O:Cs2 O:B2 O3 =1:1:6) and characteristics of the grown crystals have not been reported so far. The TSSG growth has a serious problem that is a violent evaporation of constituents from a solution during a lengthy growth time, while the Cz-growth in this study did not show any remarkable evaporation.

The furnace used here is newly developed in house, named as “table-top” mini-puller [2]. Single crystals with about 10mm in diameter and about 30～40 mm in length were gown successively along c-, a- and 4 ω-axes directions from a stoichiometric melt charged in 50cc Ptcrucible. Pulling rate and crystal rotation rate were varied, respectively, from 0.1 to 0.25mm/hr and 5 to 30rpm.

As-grown crystals contained a trail of gas-bubbles along the pulling axis at the central part in the lower two-thirds portion of the boule. The gas-trapped trail would be caused by a bunching of relatively strong faceting of {101} faces on a solid-liquid interface, independent of an interface shape. Light scattering centers were not observed in as-grown Cz-crystals with a He-Ne laser under an optical microscope, while they were sometimes observed in TSSG-crystals.

Wavelength dispersion of refractive index was compared with that of the TSSG-crystals, and it was found that the refractive indices of Cz-crystals were smaller by 2x10-4 than those of the TSSG-crystals. Glasses made of a stoichiometric composition provided a refractive index smaller than that of alkali-rich glasses. Then, it is supposed tentatively that a CLBO has a solid solution range close to the stoichiometric composition. This point will be discussed from the viewpoint of an annealing effect on light scattering.

Optical damage resistivity was examined with a 4 ω (266nm)-beam of Nd:YAG laser and it was found that the Cz-crystals are relatively resistive than the TSSG-crystals. reported briefly. 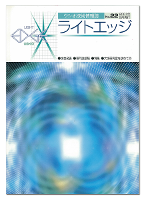