Changes in sound pressure wave forms by operating flash lamps were studied. In the experiments, two types of lamp were prepared, one of which emitted vacuum ultraviolet（VUV）light and the other did not. We investigated the position of the sound pressure origination, the frequency component, and the relation between the degree of sound pressure and the surrounding atmosphere. It was found that there are two kinds of frequency components in the exploding sound, due to the significant sound pressure. One is an audible frequency component originated from light radiated from the lamp, and the other is the higher frequency component of a nonaudible sound, caused by the mechanical vibration of the flash lamp tube. The audible sound was generated as follows: Oxygen and water vapor absorb VUV light, water vapor absorbs infrared light which is a part of the spectrum of the flash lamp, and heating occurs. Consequently air rapidly expands and generates sound pressure. We propose that sound pressure in operating flash lamps could be strongly reduced by controlling the surrounding atmosphere. © 2005 American Institute of Physics.
［DOI: 10.1063/1.2010431］

Flash lamps produce pulsed radiation, ranges from the vacuum ultraviolet（VUV）to the infrared（IR）light, by electric discharge up to the order of megawatts.1-3 The applications of this lamp are widespread from the strobe for the camera to the emergency lights for the aero systems or as indication lights at night on top of a bridge pier. Moreover, from the viewpoint of industrial applications, flash lamps are utilized as pumping sources for solid-state lasers and heating sources for toner fixing in copying machines and DVD bonding.4,5 Recently the manufacturing process of the semi-conductor has faced a significant turning point in the annealing technology of metal-oxide-semiconductor fieldeffect transistor（MOSFET）with the entering of the 45 nm node, and the flash lamp annealing（FLA） method attracts attention as an annealing technique.6-10 It is because the conventional rapid thermal annealing technology cannot fill the demand to form an ultrashallow junction adjoined source-drain of the MOSFET; that is, FLA is needed to accomplish electrical activation without appreciable thermal diffusion of implanted dopants in the silicon wafers during the process.

In order to achieve the annealing time within a millisecond range over the blanket implanted area, the equipment for the annealing process, with its array of flash lamps which are operated in high input power, has been released. When the flash lamps are operated at high input power simultaneously, an exploding sound, due to the significant sound pressure, is generated, which may cause some problems. An example is the misetting on the semiconductor microfabrication caused by vibration from which harm could be caused to an operator’s body. In the equipment, acoustical materials are employed in the lamp housing, resulting in higher costs.

As long as we have known, research on the sound of lamp has been done only on the resonance effect inside of the lamp, and no research has been done on the generation mechanism of the exploding sound in operation. In this article, sound pressure measurement and frequency analysis in flash lamp operations are reported. We focused attention on the generation mechanism of the audible frequency component originated in the flash light and proposed a sound reduction technique to be used in industrial application.

Figure 1 shows a schematic diagram of the experimental setup to measure the sound pressure in the flash lamp operation. The measurements were performed by operating two flash lamps with different tube materials. One was the“VUV lamp”which radiated a spectrum from the IR to the VUV wavelength, and the other was the O3 free lamp（UFQ-75002P, Ushio Inc.）which radiated a longer wavelength than the VUV light. Both of these lamps were Xe flash lamps of linear shape. They were operated with 0.4 ms pulse duration and 1.4 kJ input energy.

In order to avoid the frequency change on the sound source due to lamp fixation, the flash lamp was hung by its lead wires. The sound pressure was detected by the micro-phone（UC-29, RION Inc.）and the wave form was recorded by an oscilloscope（9310A, LeCroy Inc.） through the precision sound level meter（NA-41, RION Inc.）of which the detectable frequency region is 20 Hz-100 kHz.

It has been known that the exploding sound in operating VUV lamps is reduced under a nitrogen atmosphere. We con-sidered that the origin of the sound pressure was caused by radiated light or the mechanical vibration of the lamp tube.

With respect to the frequency component by the mechanical vibration, we investigated the following:

Sound pressure wave forms of the two types of lamp with an outer tube are shown in Fig. 2 for the VUV lamp and the O3 free lamp. A positive value of sound pressure represents the sound propagated with the pressure from the lamp to the detecter. The time, the horizontal axis, indicates the arrival time of the sound to the microphone. The flash lamp was located at 35 cm from the microphone and, in Fig. 2, the horizontal axis, on the top of the graph, corresponds to the distance from the microphone to the sound generating point（sound velocity is assumed to be 340 m/s.）

We can see that the sound pressure wave forms of the VUV lamp separate from the 3 free lamp after point（B）. This separation seems to be caused by the spectral difference of these two lamps.

At point（a）, a small degree of sound pressure occurred. Point（a）is equivalent to the surface position of a wind screen attached to the microphone. Consequently the sound pressure was generated by expanding air within the wind screen.

The sound pressure wave form of the VUV lamp without the outer tube is shown in Fig. 3. The wave form with 400 Pa maximum sound pressure appeared at a few centimeters from the lamp, but this peak could not be observed on the wave form of the O3 free lamp without the outer tube. As the characteristic of the mechanical vibration does not vary with the tube materials of those lamps, it is suggested that some gas species of the larger absorption coefficient were the origin of the audible frequency component with the VUV lamp.

The sound pressure wave forms of the VUV lamp and the O3 free lamp were measured by controlling the oxygen concentration and the water vapor pressure. In the measurement of the O3 free lamp, the lamp was covered with an outer tube to reveal the audible frequency component.

Throughout the experiment we found the following:

The spectral distributions of the VUV lamp and the O3 free lamp in the UV-VUV region are shown in Fig. 4. The absorption coefficient curve of the atmospheric main constituent: oxygen（ O2）, water vapor, carbon dioxide, and ozone, which may be reaction products from oxygen, are also shown. Oxygen and water vapor have larger absorption coefficients in the VUV spectrum region.

Negative sound pressure should be caused from volume reduction with ozone formation（3 O2→2 O3）which is an endothermic reaction. But all sound pressure wave forms have positive pressure to the microphone at the beginning. In the VUV lamp, it is certain that oxygen and water vapor absorb the VUV light and cause audible sound pressure by air expansion. 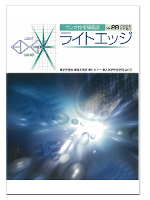