CHARACTERISTICS OF THE LAMP AND THE CIRCUIT

Radiation in DUV and VUV region are widely used in various fields, especially in industrialproduction processes, for example, surface modification, surface cleaning, sterilization and so on. High brilliance point source in this spectral region is the one of the desired light source. Flush lampsoperated at high current densities from 10 to several tens MA/m2 are commonly used for applications such as rapid heating of semiconductor surface. It is known that, the flush lamps with such a high current densities radiate some ionic lines and continuous free-bound radiation in DUV region[1].

We developed a new type of electrode stabilized Xe filled flush lamp, called the UBF (Ushio boxer flush) lamp, operated at extremely high peak current. Fig.1 is a schematic of the UBF lamp and its drive circuit.Since impedance across the lamp is very low (order of 101 mΩ), impedance of the drive circuit should be as low as lamp impedance in order to transfer the stored energy to the lamp efficiently[2]. The feed line from the condenser to the lamp anode and return lines from the lamp cathode to the condenser consist a "co-axial feed", and the inductance of the feed lines is as low asabout 100nH. The low impedance circuit allows low voltage operation to obtain extremely high peak current The flush pulse is triggered by a SCR or an IGBT, and the peak current of hundreds MA/m2can be obtained with the drive voltage of several hundred volts. This means high repetition rate operation can be easily realized with reliable semiconductor switches. The UBF lamp is operated with DC simmer current, which dramatically reduces electrode damage. Sophisticated cathode designengages stable simmer and the pulse discharge position.

A radiation spectrum of the UBF lamp with the peak current of 10.3 kA (input energy is 40J/pulse) is shown in Fig.2. We can see the strong ionic lines in the wavelength range of 180-270nm.
Radiation efficiency per input energy is about 1% in 180-200nm and 5% in 200-300nm. Observation by using high speed CCD camera (minimum time resolution is 0.5µs) reveals that the plasma diameter during the pulse to be about 6mm and not depend on the bulb inner diameter. Assuming the plasma diameter to be 6mm, peak current density of Fig.2 case is 360MA/m2. Gusinow proposed the relation between the current density and the plasma temperature of the flash lamp as[3],

where T is the plasma temperature in K, D* is the bulb inner diameter in cm and j* is the current density in A/cm2. Applying the evaluated plasma diameter (6mm) to D* of eq.(1), the plasma temperature is estimated to be 22000K. From Saha's equation, density of Xe+ and Xe2+ at the temperature is estimated to be about 0.9no and 0.05no respectively, where no is Xe atom density at RT. Consequently, the observed ionic lines are XeII and XeIII lines. Assuming the plasma size to be Φ6mm × 5mm (arc gap length), the source brilliance are 2.1J/cm2 in DUV region (200-300nm) and 0.4J/cm2 VUV region (180-200nm), and peak brilliance in DUV and VUV region are 1.1 and 0.2 MW/cm2 respectively.

The UBF lamp is a unique light source with high brilliance in DUV and VUV region, and can be applied to various fields requiring high irradiance in such wavelength region. 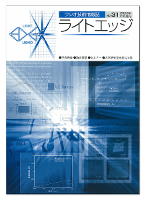