AlN was grown by a sublimation method on 6H-SiC. We found the grown AlN layer is easily separated from the substrate when Si powder is added to the AlN source powder. The formation of AlSiN layer with the Si content of 15% at the AlN/6H-SiC interface was confirmed by energy-dispersive X-ray spectroscopy and X-ray diffraction. This AlSiN layer causes the separation of AlN.

AlN is one of the candidates for a substrate of nitride-based UV light-emitting diodes (LEDs) because of its wide bandgap of 6.2 eV (UV transparency) and lattice and thermal expansion matching to AlGaN layers used in UV-LED structures. Many research groups are trying to obtain AlN bulk crystal by a sublimation method as reported in, for example, refs. 1-6. Large bulk AlN can be obtained and the characteristics of AlN are widely investigated. However, it needs long time and many processes, such as long-time growth, slicing, polishing and so on, to obtain free-standing AlN which can be used as a substrate.

In this paper, we propose a new method to obtain a free-standing AlN crystal in short time and low cost by introducing an AlSiN buffer layer between the 6H-SiC substrate and the AlN grown layer during the growth by a sublimation method.

Crystal growth of AlN was carried out by a conventional sublimation method. We used a graphite crucible with tungsten cover to reduce carbon incorporation into the grown layer. 6H-SiC (Si-face) was used as a substrate and AlN powder as a source. Si powder was added to the source by (1) mixing with AlN powder (sample 1) or (2) placing on the top of the source (sample 2). The amount of the added Si was less than 0.5 wt%. The temperature of the lid of the crucible during the growth was 1860°C monitored by a pyrometer. The actual temperature in the crucible may be a few hundred degree higher than the lid. The growth pressure was atmospheric in N2 and the typical growth time was 1 h.

The grown layer was observed by a scanning electron microscope (SEM) and examined by X-ray diffraction (XRD) and energy-dispersive X-ray spectroscopy (EDS).

Figure 1 (a) shows a surface SEM image of sample 1 (Si mixed with the source) and (b) of sample 2 (Si placed on the top of the source). Both surfaces are relatively smooth with some hexagonal hillocks. Most of the grown layers are easily separated from the substrates by a light mechanical shock, especially for sample 2. The thickness of the AlN layer is about 30 μm for sample 1 and about 70 μm for sample 2.

The XRD pattern of the sample 2 is shown in Fig. 2. A peak of AlN (0002) is clearly observed and the growth of AlN was confirmed. The full width at half maximum (FWHM) of the peak is 129.6 arcsec and relatively high quality AlN crystal was obtained. In addition to the AlN peak, a broad peak is observed at 36.5° , which may be attributed to AlSiN with the Si content of 15%.7,8) The XRD pattern of sample 1 is similar to that of sample 2 because it is difficult to distinguish between non-separated and easily-separated region during the measurement of the XRD pattern.

In order to confirm Si incorporation to the grown layers, EDS measurement was carried out. The profile of the peak intensity of Al and Si of a separated part of sample 2 as a function of the distance from the interface is shown in Fig. 3. Intense Si signal was detected in the region near the substrate and the signal gradually decreased. On the other hand, weak Al was detected at the interface and increased gradually. Note that the sensitivity is different for each element, so it does not mean Si content is higher than Al. This transition of Si and Al content agrees with the broad XRD peak around 36.5.The thickness of the transition layer is about 3μm.

Si content in the grown AlN layers for both samples was very small and was inferred to be about 1% from the EDS profile. This is because the amount of Si in the source is small and the vapor pressure of Si is high enough, so Si in the source was exhausted in the initial stage of the growth. 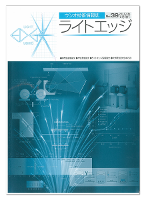