Direct drawing of laser-waveguide with width of 20µm on unflat surface was demonstrated by using micro-dispensing technique. Highly viscous prepolymers form high aspect ratios such as 18µm width and 7 µm height with one time dispensing.

In this report we tried fine drawing with 20µm width to attain optical circuit drawing on POF.

At first, the clad polymer coating removed partially from polymethylmethacrylate (PMMA) polymeric optical fiber (Mitsubishi, SK-20). The core diameter was 480µm and its refractive index was 1.486. Subsequently, the laser waveguides were drawn by the highly-accurate dispenser (Musashi Engineering, ML-808FXcom). The dispensing needle was changed from a normal SUS needle (100µm inner diameter (i.d)) to a ceramic micro needle (FN-0.02??, 20µm i.d and 50µm outer diameter (o.d)). Normally, the working distance between the needle point and the substrate surface (POF core surface) must be kept about 1~3 times of the i. d. of the needle. The prepolymer was prepared by polymerizing mixture of MMA and 2-hydroxyethylmethacrylate (HEMA), and half-polymerized prepolymers were mixed with the laser dye. To avoid spreading the prepolymers to the o.d. of the needle, the cleaning protocol must be optimized using a jet of organic solvent. The drawing parameter for narrow drawing was the viscosity of the prepolymers, the extrac ting pressure, the working distance and the drawing velocity. We also developed rotatable POF holders using motorized stages. The simultaneous drawing and rotation can obtain three-dimensional drawing on the cylindrical surface of POFs.

The laser waveguide material was p (MMA80:HEMA20) doped with Rhodamine590 in the concentration of 2mM. The refractive index was tuned to 1.496. The prepolymer with viscosity of 1000mPa·sec was drawn with the working distance lower than 10µm, and the width of the waveguide was almost equal to i.d of the needle. Fig.1 shows microscopic image of the top view of laser on the POF. The waveguide width was approximately 18µm. The length of 10mm could be drawn with unique width. Fig.2 shows the cross section profile. The waveguide thickness was about 7µm was obtained. The aspect ratio of 7:18 was 10 times higher than that of previous our work ( 3µm:100µm)

A passively Q-switched DPSS Nd: YAG laser (532nm, 10µJ) was used as a pumping source, and its output beam was coupled to an end side of the POF.

When the propagating pumping beam pulse reached to the DFB laser mounting point, the propagating pump-beam was partially coupled to the DFB laser waveguide with leaky propagation mode. Since the tapered couplings were fabricated on the both ends of the waveguide, the laser output can be coupled to the POF in forward and backward directions. The DFB laser output was monitored in the forward direction. The slope efficiency can be estimated as 12.2%, and the laser threshold around 7.2nJ was estimated.

The output spectrum was monitored as shown in Fig. 4. It seemed that the narrow waveguide fabrication provided vertically and horizontally hybrid propagation modes. So the fine spectral structure was observed. One of the modes shows bandwidth of 0.031nmFWHM, and it is half of the previous results. However, the multiple complex mode structure shows like spectral background. To improve this multiple fine modes to single peak mode, we have to reduce higher order mode by designing refractive index structure.

On the other hand, spiral laser waveguide on POF was demonstrated as a first sample of three dimensional fabrications. The rotational control equipment was introduced. It could be controlled in arbitrary angle and speed, the higher flexible three-dimensional waveguide was fabricated by using it together with the dispensercontrol. 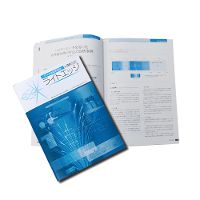