Semi Additive process is considered to dry processing for the miniaturization of the semiconductor packages. There are many problems in the manufacturing substrate of print circuit board, at the materials, tools, processes, conditions etc. Wet process depends on the chemical reaction. That will reach a limit on the precision in the future. Dry process is a concept by semiconductor manufacturing process. But it is difficult to apply for print circuit board manufacturing process. Smear removal from via bottom and forming of surface roughness becomes the trade-off in the high end substrate production.

We have been conducted of the research and development of Photodesmear process as next generation process. Photodesmear is the technology that put decomposing organic matter by vacuum ultra violet light and removal inorganic matter by ultrasonic treatment together. The removal of smear on via bottom is controllable by quantity of the vacuum ultra violet light. In addition, Photodesmear can to divide a reaction of the smear removal and the roughness formation. We show our results of the improvement of adhesion between epoxy resin and copper by Photodesmear and dry seed process.

In future fine line and space wiring, current Semi Additive process has some problems such as issues with slimming down of metal wiring in seed layer etching, adhesion between dielectric resin and Cu metal, defects of the resist pattern depend on wrong adhesion and, undercut of etching. Particularly, it is difficult challenge that the lower of the surface roughness to achieve high frequency electrical transmission loss is compatible with the improvement of the adhesion. The process of 2 microns line and space remains unusable. Dry process is proposed as alternative to wet process, which does not depend on chemical reaction and chemical solution penetration.

From previous studies, we have shown that Photodesmear is effective in panel level sized samples. We have made these samples by formation of sputter seed layer and Cu electric plating. And we have shown good results of peel strength test and via connectivity test.

In this paper, we have reported the result by Photodesmear process about a detail of smear removal process. We have observed surface roughness forming by atomic force microscope. In addition, we have shown that other applications.

Fig.1 shows the schematic mechanism of Photodesmear. The Vacuum ultra violet light (VUV: 172nm) has very high photon energy at 7.2eV which is capable of breaking bonds in organic molecular chains with molecular bonding energies lower than 172nm. The photons also serve to create ozone from atmospheric oxygen. Ozone has strong oxidization power; however the 172nm photon energy can further break down ozone to create excited state atomic oxygen which has oxidation power exceeding that of ozone. Ozone and excited state atomic oxygen then react with organic molecules that were decomposed to create H2O and CO2 [8-9]. 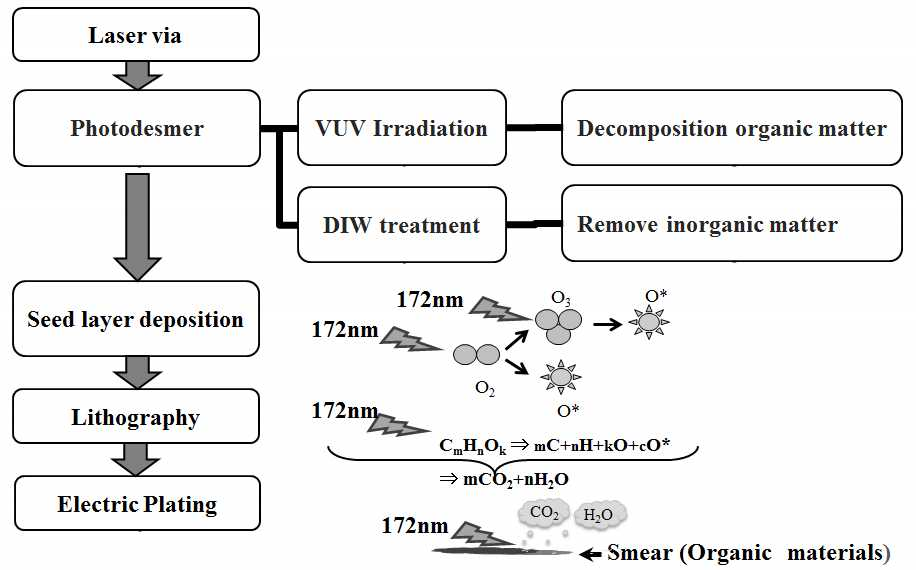 The method of treatment of sample is as follows. The materials we used for this experiment are 400μm thick glass/epoxy core with CZ treated Cu film. Dielectric film (ABF-GX-T31, 25µm, provided by Ajinomoto Fine Techno Co., Inc.) is laminated with entire surface of the 500mm square panel. PET film is laminated on the surface of the dielectric material as protection layer.

Via holes were drilled by CO2 laser manufactured by Via Mechanics Ltd. (Model #: LUC2K21/1C) having φ50 micron diameter via with 1mm via pitch.

Fig.2 shows the cross section schematic diagram of a high-power VUV irradiation tool. The high-power Xenon excimer lamps which are newly developed are installed multiple to cover the irradiation area. A substrate is placed on the temperature controlled work stage. The process chamber is sealed and filled with the process gas. The VUV light (172nm) is irradiated through the synthetic silica glass window. 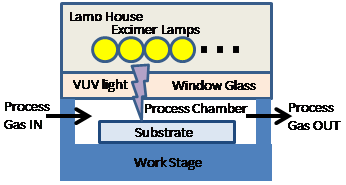 After the organic matter decomposition by the VUV irradiation, ultrasonic cleaning by deionized water is provided to remove the silica filler.

Conventional process cannot handle desmear process with attaching a PET film to use strong chemicals, but Photodesmear can accomplished it. After Photodesmear, PET film was peeled off from dielectric surface.

A seed layer composed of Ti/Cu was sputtered on a panel. We have used a large sputtering tool made by Tango Systems Inc. “TOPAZ”. Pretreatment is necessary for an organic panel before sputtering the seed layer. The tool has necessary function for degas, ICP cleaner, etc., with optimized conditions of pretreatment. Therefore, followed to deposited 30 micron thickness of Cu layer by electric plating.

Fig. 4 EDX spectrum from via bottom

We observed a removal process of smear by EDX spectrum. (a) is typical spectrum before Photodesmear, (b) is after Photodesmear. The accelerated electron beam probe arrives at copper pad of via bottom. Therefore, we can measure residual quantity by the peak ratio (C/Cu) of the carbon for a copper strong signal.

Fig. 5 shows relations of irradiation time of vacuum ultra violet light and C/Cu. C/Cu decreases linearly for irradiation time. As for this thing, the reduction of C/Cu shows that it is the primary for quantity of the light. 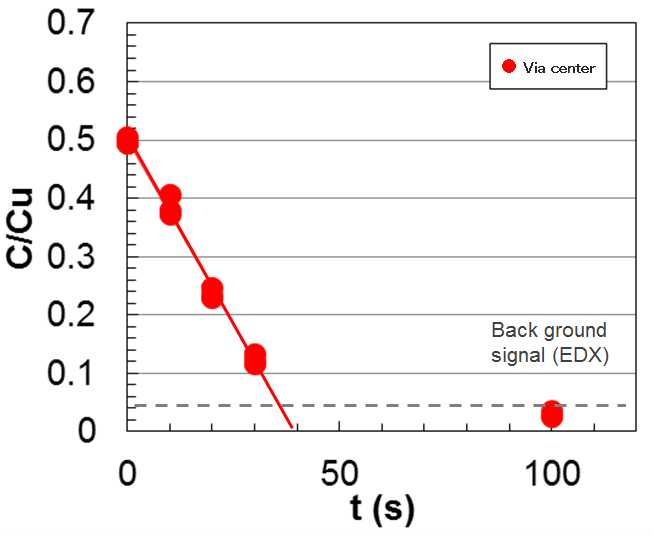 There is not it with the thing depending on a complicated chemical reaction such as the wet desmear. We can calculate quantity of removal of smear with quantity of the light, and design the desmear process. 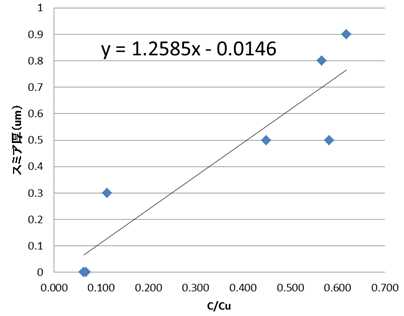 We investigated relations of the C/Cu ratio and the smear thickness.It is difficult for the thickness of the smear to measure it. We measured  average thickness of five points of center of via bottom from cross section SEM images in this report. From aresult of Fig. 5 and Fig. 6, the removal rate of smear by Photodesmear culclated with 11nm/s.

When we laminates dry film resist for photo lithography, if roughness of the surface of seed layer is small, adhesion strength of dry film resist becomes a low. We can distribute cleaning of the via bottom and surface roughness control. We can get roughness neccesary for the adhesion of the dry film resist lamination. Fig.7 shows behavior of the roughness Ra at the irradiation time of additional vuv treatment. The roughness increase depending on vacuum ultra violet irradiation time, but become the constant value according to the size of the silica filler in a certain point. Photodesmear give flexibility for the formation of the surface roughness in production of the substrate. ( These data are different from the data of the laser microscope and atomic force microscope.) 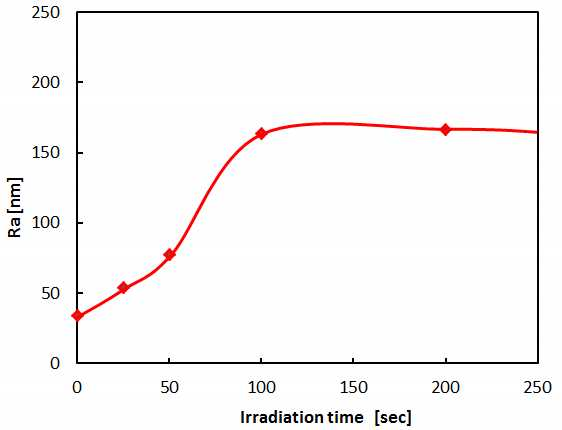 Fig. 7 Behavior of roughness Ra by the urradiation time 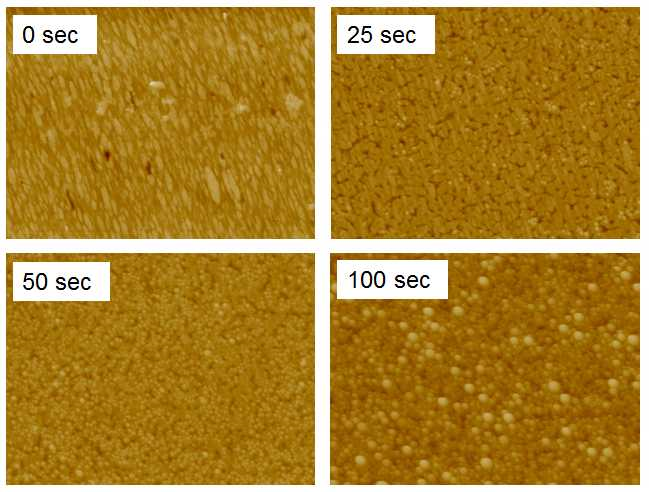 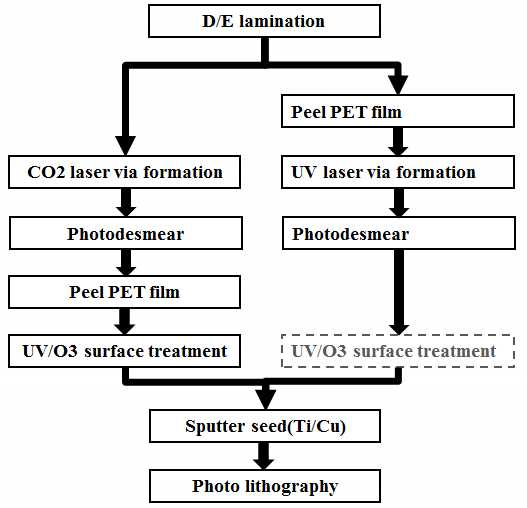 Ultra violet laser is the technology is effective for the micro via formation in next generation printed circuit board. It can form via which is smaller than CO2 laser, and the smear is little bit for example 1/5 degree. The wavelength of the UV laser is 355nm.  When via is formed by UV laser, we cannot use poly ethylene terephthalate film. Because of ultra violet light is absorbed by PET film. However, the processing times become less than the CO2 laser. We can give surface roughness thinly, it is convenient.

We evaluated the peel strength of the Cu electric plating panel to confirm adhesion strength between dielectric and Cu layer. 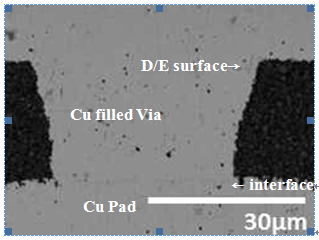 Table 1 Comparison of the condition and peel strength

The dry process is a concept, which applies the wafer processing semiconductor production concept with the production for PCB packaging. Photodesmear process provides a solution for the problem that cannot be settled by the conventional process depending on a chemical reaction of the chemicals and diffusion of the chemical solution in the micro via.

In this study, Photodesmear process shows,

1) We showed principle of Photodesmear.

4) We evaluated the peel strength in case of CO2 laser and UV laser.

Photodesmear separates the smear removal and a surface roughness formation process. Photodesmear offer possibility of the surface control in the production of the print circuit board. The principle has flexibility in future material development.

A part of this experiment was supported with ABF-GX-T31 sample provided by Ajinomoto Fine-Techno Co., Inc.

[5] Hiroko Suzuki, “Photodesmear Applicability for Blind Via Holes on a Build-up Substrate” in The Japan Institute of Electronics Packaging 2016. March 2016.