We report here the development of highly selective and sensitive detection of β-agonist compounds by using Surface Plasmon Resonance (SPR) immunosensor. Since the β-agonists are illegally used by farmers to increase their profits gain, so the compatible method is urgently required which can measure many samples from food products. For the construction of robust SPR sensor surface, the β-agonist protein conjugates were immobilized onto the sensor surface via functionalized alkanethiol monolayer. Since β-agonists are small molecules, Indirect competitive inhibition method was employed in the detection. It was found that the detectable ranges for ractopamine and salbutamol were 10ppt to 1 ppb and 5 ppt to 500 ppt, respectively. It was also confirmed the 87.1 % and 96.5 % selectivities for ractopamine and salbutamol, repectively. The structures of the sensor surfaces were evaluated by SPR, CV, STM, and XPS.

Clenbuterol (CLB), ractopamine (RCT) and salbutamol (SAL) are members of the β-adrenergic agonist family. They were original drugs for the treatment of pulmonary disease and asthma. However, due to their potential roles in decreasing adipose tissue deposition and increasing protein accretion in livestock, β-agonists were illegally feed to animals. β-agonists are easily deposited in human beings after daily meat consumption. However, it is very hard for a mass transducer to detect them from food products, because they are small molecules (molecular weight < 310). Previously, we have reported the direct detection of clenbuterol by using surfaplasmon resonance (SPR) sensor system that is a mass transducer equipped the detectable mass change in pico-gram order. However, the direct immunoassay could not achieve the high sensitivity. The detection limit was in hundreds ppb order. In past, Miura group had proposed the highly sensitive immunoassay by using the indirect competitive inhibition method1-2. Thus, we had applied the indirect competitive inhibition method to the detection of clenbuterol. The detection limit was drastically improved, and reached at 5 ppt of clenbuterol.

This study reports the SPR immunosensing based on the indirect competitive inhibition method for detection of remained β-agonist compounds; ractopamine and salbutamol. We propose to use β-agonists-protein conjugate-immobilized propanethiol monolayer as the biosensor surface for highly sensitive and highly selective detection.

SPR experiments were performed using a SPR 670 (NIPPON Laser and Electronics-Japan) equipped with a flow injection system for immunoanalysis.

The structures of the sensor surfaces were evaluated by SPR, CV, STM, and XPS.

Fig.1 shows the fabrication process of the sensor chip. First, dithiobis(succinimidyl) propionate was flowed over the Au chip surface. Au surface was covered with succinimide terminated propanethiol monolayer by self-assembly process. And then, β-agonist-protein conjugate was injected to the surface. Succinimide group was replaced with β-agonists-protein conjugate by amide coupling reaction. In order to deactivate the remained succinimide groups, ethanolamine was injected as blocking agent. Sensor chip was used for detection of β-agonist immediately after the fabrication.

Fig.2 shows the STM images of the β-agonists protein conjugates-immobilized sensor surface. Au islands were occupied with 10 nm of ractopamine-BSA conjugate spheres and 5 nm salbutamol-HRP conjugate, respectively. Mainly, the protein conjugates preferred to bind to the top of Au islands.

Immunoassay format of indirect competitive inhibition method was employed for the detections of ractopamine and salbutamol. Figure 3 shows the typical sigmoid-typed caliburation curve. As the lowest detection limit was determined at 85 % of total resonance angle shift, they were 10 ppt and 5 ppt for ractipamine and salbutamol, respectively. These detection limits were much higher than the required detection limit (100 ppt) for practical use3. For selectivity of the sensor surfaces to the target molecules, the cross-reactivity experiments were conducted and produced approximately 90% of confidence level. 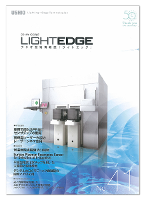