BGA, CSP, MCM, etc. companies are developed for improving packaging density. Recently, more highly efficient MCP (multi chip package), SiP (system in package), etc. has been developed. Printed wired boards used as the base of such packaging technology are progressing miniaturization and higher density. Manufacturing technologies developed by semiconductor manufacturing has been also applied. Build-up method, which laminates the wiring layers is adopted in many high-density wiring applications. In the field of exposure method in the semiconductor exposure technology, the shift to a step and repeat projection exposure method from a contact exposure method has begun. The step and repeat projection exposure method has the advantage of high alignment accuracy with no mask damage and an auto scaling function. In order to use the projection exposure method more effectively, it is necessary to understand correctly the features of this method, such as control of exposure, focus control, magnification and distortion of projection lens, and the characteristic of the illumination unit. In this report the comparison of the two methods and the latest development of the step and repeat system in USHIO is described.

USHIO has developed Step-and-Repeat Exposure System for achieving high resolution, high overlay registration accuracy, and improvement in the yield. "No contact of a mask with a substrate" and "Able to vary projection magnification along with the expansion and contamination of the substrate (auto scaling function)" are the greatest features of this exposure system.

Step-and-Repeat Projection System is effective system in manufacturing PWB of under 30µm minimum line width patterns and below ±20µm overlay registration accuracy demands. Step and Repeat which is non-contact method have improved the product yield due to less or no damage to mask. Such damage to mask was cause by contacting substrate in past.

The contact exposure method has been used conventionally as the exposure system for PWB. The extent of the exposure area and low system cost is effective in manufacturing PWB of above 50µm minimum line width patterns and ±30µm overlay registration accuracy demand level.

However , in recent years, the progress of miniaturiza tion and higher density and higher performance made PWB has evolved with the development of a high-density packages and the manufacturing of high-density PWB such as 20µm minimum line width patterns and below ±15µm overlay registration accuracy demands are being required.In this case, mainly three following problems arise by contact exposure system.

In Step-and-Repeat projection system, the greatest difference between for the PWB and for semiconductors is the performance of the projection lens installed. As for a projection lens, the exposure area and resolution are in inverse proportion

Although, pursuance of minituauzation in step-andrepeat projection exposure system for semiconductors have yield very high resolution performance, but small exposure area. Moreover, DOF for securing a resolution performance is 1-2µm or less. An also required for high precision, will result in very expensive system.

With consideration of productivity, the step-and-repeat projection system for PWB, projection lens is required to have the balance exposure area and the resolution performance. Furthermore, 50 -100µm DOF need to be secured, corresponds to the printed circuit board that curves greater in compared with a wafer. Also, the large auto scale range of ±1000 ppm is a plus feature for printed circuit boards.

The feature of a step-and-repeat projection exposure system is explained in more detail below.

Please note that mask do no contact substrate. The mask image on to the substrate by projection lens. This projection lens varies by wavelength, exposure area, and resolution. Lens model is mainly determined by the minimum line width pattern demands. Table 2 is the list of USHIO's main Projection Lenses.

Typically, contrast of the image formed on substrate is the maximum value when a mask and a substrate contact completely. That means, the state of perfect contact exposure is the highest contrast and as a result, shows high resolution. However, in most of the contact exposure, it is exposed in the state with some gaps, because of the warp or undulation of a substrate or to avoid the mask damage. The protection film of the photoresist of a substrate may be equivalent to gap. When there is a gap between a mask and a substrate (state of proximity exposure),the contrast of an image falls in proportion to the increase in a gap and the resolution will worse.

Above mentioned were the introductions to the features of Step-and-Repeat projection exposure system.

It is expected by the characteristic of "No contact of mask with substrate" and "Able to vary projection magnification along with the substrate expansion or shrinkage (auto scale function)" as a leverage, many step-andrepeat projection exposure system will be utilized in manufacturing of a high-density PWB of below 30µm of maximum line width pattern and below ±20µm overlay registration demands.

Selecting the projection lens suitable for each application and taking advantage of this high overlay registration accuracy, more sophisticated and high performance package module PWB is expected to be in production within few years. 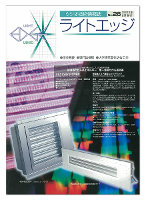